Very early in my working life, I was Kelly Clarke, a disk jockey (ahem, radio announcer) at what had been the birthplace of Top 40 in years past, KLIF. As an AM station in a world where FM ruled music radio, we had to try harder to get attention, so we regularly appeared at onsite promotions. It was only natural that KLIF would sponsor the local premiere of the Sgt. Pepper's Lonely Hearts Club Band movie (starring Peter Frampton and The Bee Gees!), and the promo dept announced that it would involve some "very special guests."

The premiere was scheduled for a multiplex in the Dallas suburb of Garland. (Garland was a major inspiration for the setting of the cartoon "King of the Hill," so try to imagine what kind of movie premieres there and what kind of "special guests" might actually show up.) We, the on-air talent, learned that WE would be the special guests, dressed up in colorful band jackets rented from a costume shop. Y'know, like on the cover of the Sgt. Pepper album, right?

So Allen Farmer, Steve Scott, Harry Nelson and I arrived at the premiere in a limo, but stayed inside hidden by the darkened windows, building what we were assured was a frenzy of anticipation and excitement, until the audience was seated in the theatre and ready for the movie to start. Then we walked in together under a spotlight -- like anyone would recognize our faces anyway since we worked in radio -- and the only reaction was "Hey, that isn't Frampton and the Bee Gees!" 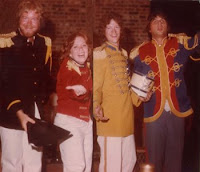 We had to sit there in our cordoned-off seats wearing smelly old band jackets through the entire awful movie (rated 3.4 out of 10 on imdb.com; the Zap2it.com description is "Sgt. Pepper's grandson and three other guys form a band and fight bad guys. Based on a Beatles album."). The promo guy wouldn't let us leave during the screening while the house lights were safely out. I hope he's shilling for the ghost of Enron now.

I recall discussing that evening with my fellow suffer-ees only once afterward, when we decided that the TV show "WKRP in Cincinnati," while billed as a sitcom, was actually a documentary.

(NB: Possibly the most bizarre twist in this story was that my cousin, the late Terry Southern, also had a connection with Sgt. Pepper's Lonely Hearts Club Band ... the original one. He was among the faces on the cover of the album -- wearing sunglasses, not a short red band jacket. Sigh.)
Posted by bthaggard at 11:03 PM